DYSART, Ia. — The Main Street in Dysart is typical of those you find in other small Iowa communities — except for the giant gorge painted in the middle of the road.

If you squint just right, it seems that the public library, a women’s boutique and a Methodist church are about to be sucked into the bottomless pit. Cars parked nearby look ready to roll back into the gap.

But despite the dilapidation the illusion represents, in actuality, it’s a step toward preservation for the community of just 1,300.

In 2017, city leaders invited staff from the Iowa Economic Development Authority to tour the town and make recommendations on how to attract more people to the community located 30 minutes outside Waterloo.

Their advice: Be bold; incorporate art.

“You want to do something different,” Luze said.

So Mary Snyder Behrens, a retired artist who lives at a nearby farm, suggested the town create a series of anamorphoses — better known as optical illusions.

“Everyone does murals,” Behrens said. “I said, ‘If you want to do something to bring people in, it’s got to be bold.’ “

Saving the town from sinking

Like other small towns in Iowa, Dysart is focusing on retaining its population as people leave for surrounding urban areas.

Iowa’s rural communities have suffered decades of population loss. New data released by the Census Bureau this year underscored the bleeding: two-thirds of Iowa counties lost population between 2010 and 2017.

Dysart is no exception: Tama County, where the city resides, has lost nearly 2 percent of its residents since 2010.

The town itself has mostly retained its population, but agricultural crises and natural disasters have changed its identity.

In the 1980s, the farm crisis left farmers in the Midwest in economic ruins and severely impacted agricultural-based communities like Dysart.

A barbershop, two grocery stores and a pharmacy used to line the streets, but they closed, Behrens said. Packs of individual farmers left, while larger operations took over the fields.

The town rebuilt in the 2000s, but  in 2011, a powerful straight-line windstorm — a derecho — developed in the skies above central Iowa and caused extensive damage in the eastern part of the state — particularly in Dysart.

Buildings were destroyed. Roofs collapsed. The farmers that still remained just outside of town were displaced. Even Behrens lost 200 trees and a barn.

“You didn’t want to look at your property destroyed,” Behrens said. “I know a lot of people walked away.”

Janet Wilson owned a veterinary clinic in town for 30 years and cared for livestock. When the farmers left, there were only cats and dogs to care for.

Coming together to fill a hole

Under a canvas tent in May’s blistering Iowa heat, a group of women chatted as they munched on their trail mix and homemade rhubarb pie.

Despite the temperature outside, dozens of students and community members donned their work clothes, grabbed some paintbrushes and slowly transformed the monotonous gray pavement into a colorful illusion.

It’s a sight that struck Behrens at her core; the work — and the finished product — was emblematic of Dysart’s efforts to change and thrive.

After all, Dysart’s not a place where you would expect a small town to come together for art — it doesn’t have a history of it.

“These people don’t know a thing about art, but they embrace this like they have,” said Behrens, an abstract artist. “They don’t look at my real work, but they love this.” 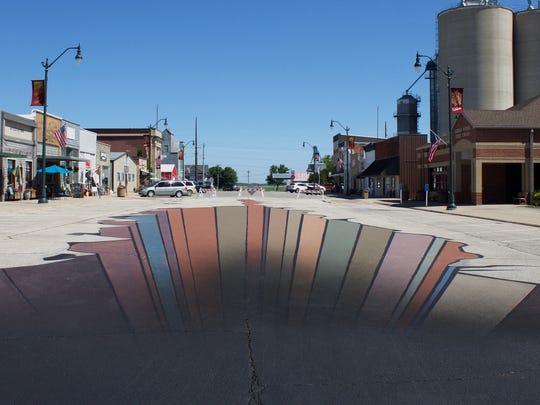 The completed Dysart gorge on Main Street. Volunteers painted the optical illusion during the hot May heat. (Photo: Special to the Register)

Since the derecho, storefronts in town have changed. They’ve come and gone, but the Dysart Development Corporation has tried to diversify the offerings in the town and draw people in from Waterloo and Cedar Rapids by giving them what they can’t get in the big cities.

More specialty shops, like Sassy’s Boutique and Blacksmith Boutique Garden & Studio, line the street. There’s a fair trade store and a yarn shop that sells goods from a local alpaca farm. Most of the shops are filled, though two remain empty.

Business owners are counting on innovative ideas like the illusions to help bring foot traffic to their shops.

“We need to bring people in,” said Ann Seebach, 61, owner of Artists of Note. “The foot traffic will happen if we have exciting opportunities for people to come and enjoy.”

The illusion can draw people into Dysart, but what residents provide after the initial sightseeing will make all the difference, said Bethany Wilcoxon, vice president of community development at McClure Engineering.

Wilcoxon is currently working with Villisca, a similar-sized community known for the site of a gruesome ax-murder that draws in 400 to 700 tourists each month. But after visitors walk through the ominous halls of the home, where else can they go?

“To be truly successful, they have to take a holistic view,” Wilcoxon said.

The existing storefronts are unique and provide reasons for people to come to town, Wilcoxon said. Next steps are building upon those and providing visitors with more experiences, like performance art centers, breweries and maker spaces.

“Those types of shops are those things you can’t get on Amazon or online. This is what we see as the next generation of retail in small communities,” Wilcoxson said.

Not everyone sees the sinkhole as an act toward revitalization.

“I just think it’s a waste of money and time because someone will probably vandalize it because there’s a lot of little s—- in this town,” said Diana Sparks, 66, of Dysart.

Sparks has lived in Dysart all her life but feels ostracized as she walks through town and doesn’t recognize the people around her.

“I knew everybody and now I see these people and I don’t know who you are,” Sparks said, while preparing Dysart’s community center for her daughter’s senior graduation. “They’re young and they’re busy and they don’t want to get to know people, I don’t think.” 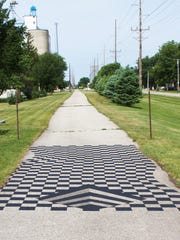 A chessboard illusion on a bike trail in Dysart, painted by Mary Behrens. (Photo: Special to the Register)

Getting millennials to stay in town is also a challenge. While the population has mostly been retained, it’s aged. Young people in town complained about a lack of childcare — particularly for infants. But now, the school district is transforming part of the elementary school into a non-profit daycare center that’s set to open in August.

“It’s a tough thing for any small town, but in order to stay alive, you have to make changes,” Luze said.

As for the future, the sinkhole isn’t the end of Behrens’ wacky optical illusion ideas. The sinkhole is made out of latex paint and will be re-touched for years to come. But Behrens also laid out a checkerboard illusion on a bike trail and is planning a koi pond illusion in a city park.

In 20 years, she hopes to have 20 illusions to draw people in and see the wonders of the tiny town she chooses to call home.

“There are people really dedicated to this,” Behrens said. “I think that’s the beauty of this is that’s it’s truly a community project.”