Jeri Pearson – Oct 11, 2017 – As community leaders attempt to grow Mena a common thread is weaving together conversations: collaboration. Leveraging the knowledge and assets of their agencies and offices will be key to developing the area through a nationally trending tool called Creative Placemaking.

According to the National Endowment for the Arts, Creative Placemaking happens when partners from public, private, non-profit and community sectors strategically shape the physical and social character of a neighborhood or town, often with  intent to grow the area economically.

The arts, culture and unique aspects of a community are leveraged in order to develop avenues for growth that would not be available through traditional economic incentives.

Zachary Mannheimer, a community planner with McClure Engineering, told leaders at a meeting earlier this month that Mena has everything in place to develop a Creative Placemaking project. 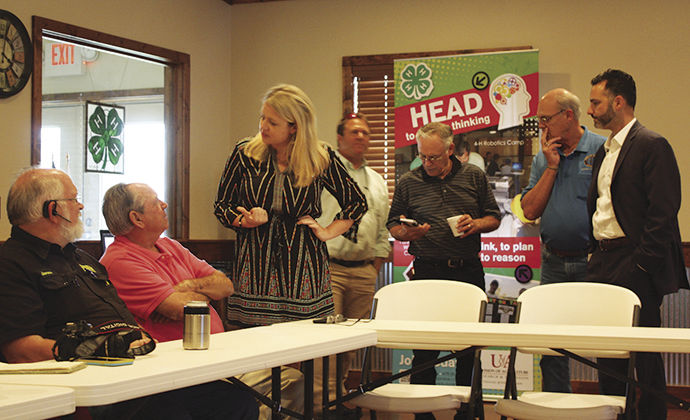 Mannheimer came to Mena at the request of Mena Downtown Partners and ARCO to visit with Walter Deetz, who made a significant investment in salvaging and restoring the former Mena High School on Mena Street.

After touring the building and Mena, Mannheimer presented leaders with the concept of Creative Placemaking and his experience around the nation with projects to revitalize neighborhoods.

“The traditional economical development mold no longer works,” he said. “Everywhere offers tax incentives to locate businesses to their area. What people are looking for now is quality of life, what is unique about your area, what can you offer outside of a traditional tax break?”

Increasing an area’s economic foot print by focusing on households and population, rather than on bringing new industry and jobs is the new model many cities are following.

“Rather than incentivising business, look at what positions need to be filled in your community,” Mannheimer suggested. “Some areas need educators, while others need law enforcement or healthcare professionals. Find out how you can help your existing businesses and community needs by attracting people who have the skills your community is lacking.”

A mold Mannheimer has successful experience with involves non-profits working with developers to develop housing. The housing is then offered to new residents at a discount, if they agree to live and work in the development and in the high-need job field for a specific length of time.

“By adding a new resident, you add a tax payer, a shopper, and hopefully that person decides to stay in the community after the agreement expires. They start a family, have children and they go to the local school… all things that add money back into the community. The return on investment is larger and has a greater impact this way than the traditional industry incentive model.”

Mena Mayor George McKee said he heard some ideas that he feels the city should explore with leaders and others that he did not see coming to fruition.

“Turning Mena Street into a two-lane was mentioned, and I don’t see that happening because I don’t think people will support it,” he said. “When you are in an elected, governing position, you’re charged with carrying out the will of the people. If the people support it, then it is an idea we could look into.”

After he has had discussions regarding Deetz’s property, McKee also noted the importance of spending tax dollars appropriately.

“I agree with those who say Deetz did an amazing, wonderful thing by saving the school,” McKee said. “But it is not the responsibility or the right thing to spend the people’s money on a private venture.”

“We partner with the chamber by allowing them the use of the train depot,” he explained. “That is something that the community benefits from and they are not a private business or person.”

McKee said if discussions led to a non-profit purchasing property and it would show significant promise of enabling economic development or community benefit, he feels city leaders would consider finding a way to partner.

Ashely Smith, director of the Mena-Polk County Chamber of Commerce, said the energy among leaders to work together is encouraging.

“I am pleased [with the] initiative to reach out to visionaries like Mr. Mannheimer,” Smith said. “His presentation was fresh. yet completely functional. I felt like we were presented with real possibilities that we can implement in the very near future.”

“I think the success of Creative Placement relies on the model being able to be applied to a range of different communities, and I do not think Mena would be an exception,” she continued. “Based on his presentation, we have to determine what parts of our community will benefit the most from the Creative Placement formula. This is perhaps the most exciting part, the fact that so many of his ideas would work well in Mena just by plugging in different elements specific to our needs.”

Smith agreed with a statement Mannheimer made during the meeting, which praised Deetz for his contribution to the community in restoring the former school property.

“I wholeheartedly agree that saving the high school was and is a significant action,” Smith said. “The school, besides being a wonderfully unique and spacious structure, holds many memories for locals. It reminds us of a time when Mena Street was full of activity day and night.

“In my opinion, saving the school was one of the best things that could be done for our downtown,” Smith continued. “When someone puts forth the effort to save an important building, the way that Mr. Deetz has, the surrounding area has a much higher chance of survival and revitalization. People take notice and take action.”

Rick Chrisman, Mena Downtown Partners president, said he feels developing Deetz’s property would be a move in the right direction for Mena.

“I think we all agree that the focus needs to be on the school because that in itself is a significant project and can be a great improvement to downtown,” Chrisman said. “If that is successful, it will spur more interest in new businesses and being in downtown.

“There is little doubt there are examples of downtown revitalization here in Arkansas demonstrating the value of those projects,” he continued. “Some of the ideas that were presented will be pursued by other organizations, such as ARCO. There is positive energy and momentum to bring some of these changes to Mena. In addition to ARCO, Mena’s Downtown Partners, Mena/Polk County Chamber and others are supportive of many of these changes that can benefit the local economy and increase tax revenue that has recently been stagnant or decreasing. Support of local government and businesses will be critical to implementing these improvements.”

Chrisman said at this time no specific suggested uses for  Deetz’s property have been planned out, but he looks forward to continuing to work with Mannheimer as plans are made.